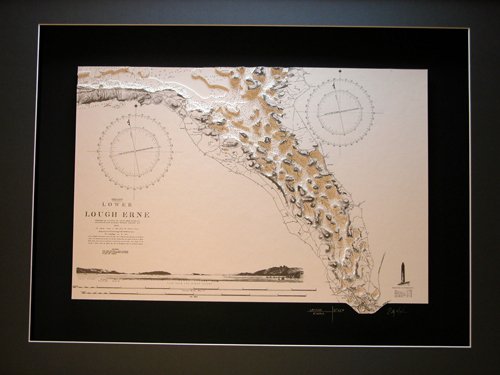 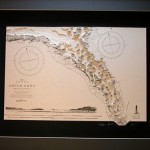 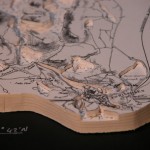 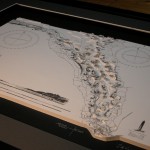 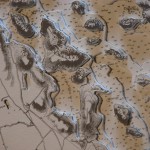 This chart features the southern section of Lower Lough Erne, Co. Fermanagh. The town of Enniskillen lies on the short stretch of river between Upper Lough Erne and Lower Lough Erne. The lake has 154 islands along with many coves and inlets. This adds to the complexity and also the visual aesthetics of this lovely 3D chart. On the bottom of the chart there are artistic-impressions of local elevational views including that of the Round Tower on Devenish Island.

When windy, navigation on Lower Lough Erne, running for 26 miles almost to the Atlantic, can be something of a challenge with waves of open-sea dimensions.

Enniskillen, shown on the southernmost part of this chart is the county town of Fermanagh as well as its largest town. Unfortunately, Enniskillen has been the site of several events during The Troubles, the most notable being the Remembrance Day bombing of 1987 in which 11 people were killed. Of more recent historical note; Enniskillen was chosen as the venue for the 39th G8 summit held in 2013. The gathering was the biggest international diplomatic gathering held in Northern Ireland.

The chart used is from the Admiralty archives. It is set on a black background and is finished with a charcoal mount and black frame. It is a particularly attractive piece.