“A piece of home, away from home”

Jeremy Greene lives in Perth, Australia where he has spent half of his life. Originally from Clonakilty, Co. Cork, he returns to Ireland on a regular basis. He purchased an apartment in Kinsale which he uses for extended vacations. With a spectacular view over Kinsale Harbour and in the distance is the iconic feature “The Old Head of Kinsale”.

In 2006 Jeremy commissioned me to make a light chart. There was a choice of two charts, the inner detailed chart of the harbour; Admiralty 2053, or the coastal chart ‘Kinsale Head to Power Head’; Admiralty 1765, which includes the entrance to Cork Harbour. A difficult decision, on one hand you want to show the detail of the place where you live yet there is a need to put the house location in perspective. So I came up with a novel solution – combine the two charts. If you look closely at the picture you will see that we inserted the detail section of the harbour into the lower right corner of the coastal chart. Problem solved! The navigation lights are replicated in both charts which is a nice feature as well as the house location using a constant-on blue light. The chart was shipped from Kinsale to Perth and is flashing away in Jeremy’s home, a piece of home away from home! 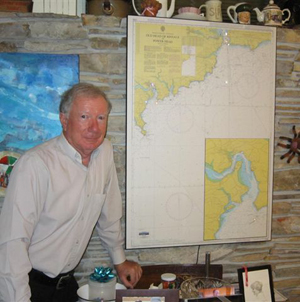 “I was very impressed when I first saw one of these Light Charts and sought out Bobby to commission a personal edition of the Kinsale area, incorporating an overall view of the coast and an enlarged chart of Kinsale, both with a few extra static lights. It has proved to be a great talking point, flashing away on my kitchen wall for some years now”.